My name is Steve Brown.

In 1999, I created a style of yoyo play that involved tying a weight on the end of your yoyo string so that you could perform tricks that used both ends of the string at once. My goal was to make yoyoing look bigger on stage…compared to juggling, yoyoing just doesn't fill a lot of space. Juggling tricks are larger and involve more risk, so the audience responds to that sense of danger; I wanted to make yoyoing feel more like juggling.

It started with Slippery Eel, a style of play where you just don't attach the string to your finger and try to play like normal. It opens a few interesting possibilities, but in 1999, it was just a way to sling the yoyo around your leg and usually miss it, sending it flying across the room. (People have since done some cooler stuff with Slippery Eel, like Will Chavez, but at the time it wholly sucked.) I was struggling with it, and my buddy Mark McBride suggested I add a tiny plastic bead to the end of the string to keep it from sliding through my fingers. He gave me a tiny heart-shaped bead which I promptly lost. 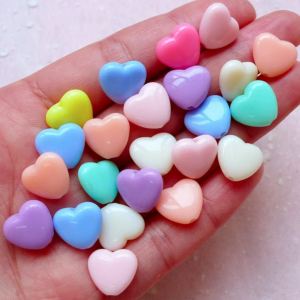 It was this big. What is this, a counterweight for ants?

A few weeks later I started working on Slippery Eel again, and couldn't find the bead. But since it was the late 90's I had what most idiot guys my age had….a very, very long wallet chain with a couple of drilled casino dice strung on it. I took one of those off and tied it to the end of my string. 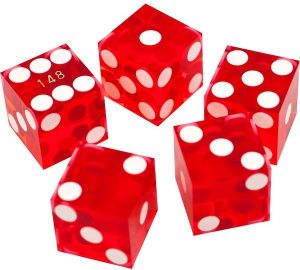 The corners on these were so sharp that my hands were bleeding a lot. I started filing them down after the first week.

I threw a trapeze and then I sneezed. I accidentally let go of the weight and it slid across, catching between the fingers on my catching hand, and leaving me holding a left-handed sleeper. I remembered some guitarist saying in an interview once “If you hit a wrong note, hit it again so they think you meant it." So I swung the yoyo back up and caught it as a trapeze, dropped the weight, and reset back to a right-handed sleeper. I did that back and forth a few more times and realized that the die created some interesting movements because of the weight and momentum. Since I'd been hanging out with a lot of jugglers at that time I immediate started treating it as a combination of yoyoing and juggling, and over the next couple of months I built out the tricks that I would end up debuting at the 1999 Bay Area Classic, the first time 5A was ever performed on stage.


I ended up working for Duncan Toys, who paid the pile of money to turn my idea into US Patent 6,371,824 for “Yo-Yo and Method For Using a YoYo" and at the time I thought that was super cool. Counterweight play started to take off, and players like Chris Neff, the Severance brothers, Jon Rob, Jake Bullock, Shingo Terada, Makoto Numagami, Dana Bennett, Miguel Correa, Rafael Matsunaga, and so so many more took my rudimentary foundation of ideas and turned it into the style it is today. Counterweight play became its own division at the World YoYo Contest in 2003 and has since become an integral part of modern yoyo play.

That patent has finally expired, and counterweight yoyo play is fully and completely in the public domain for all players, hobbyists, and companies who want to make it their own. And I couldn't be happier about it.

I initially built this website just to be a countdown timer until the patent's expiration but now it's going to be a knowledge hub for all things related to counterweight yoyoing. I'll do my best to keep it updated, and I'll cheerfully welcome help from anyone who is interested, just drop me a line.